The Food Act 2006 provides the foundation upon which food businesses are regulated. This act is applied to the whole of Queensland and responsibility to regulate food businesses such as cafés and restaurants has been delegated to local governments. The act states that the Food Safety Standards must be adhered to and chapter three of the Australia New Zealand Food Standards Code is applicable to the food safety in the kitchen and the design of commercial kitchens. While these standards are designed for commercial kitchens, the safe food handling practices can be used in the home to minimise the risk of foodborne illness.

A food licence is required to sell food to the public however a number of exemptions apply. Some exemptions include the sale of foods defined as “snack food”, and the operation of a food stall by a registered not-for-profit or charitable organisation. Other exemptions apply to the sale of packaged foods.

Food businesses can be run from private premises but the kitchen must meet commercial kitchen standards and be inspected before an application for a food licence is made.

Food vans that serve food such as burgers and chips are required to have a mobile food licence. Vans that sell coffee and tea are not required to be licensed.

Contact our Environmental Health Officer on 1300 362 242 for food licensing details. We offer a free kitchen assessment prior to application.

The most common form of food poisoning is caused by the Campylobacter bacteria. This is closely followed by Salmonella bacteria, which is probably the most recognised bacteria that causes foodborne illness. Campylobacter and Salmonella can cause mild to sever gastrointestinal illness. Listeria monocytogens causes listeriosis and is usually found in soft cheeses and cold meats. It is of concern to pregnant woman as it can result in the illness or death of an unborn child. Bacillus cereus is associated with a wide variety of foods including milk, meats, fruits, vegetables, fish and rice although the number of illnesses from this bacteria are lower than others. Illness from Clostridium perfringens is likely to be under represented because it usually begins 8–22 hours after consumption. It usually occurs in meat products and gravy. Clostridium botulinum is usually found in meat, canned vegetables, seafood and honey. It is a rare but serious illness that can result in death. 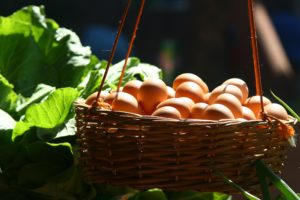 Only registered and licensed egg producers may sell eggs to the public. These eggs are stamped with a Julian code (ink stamp) that indicates the place of origin of the egg and possibly the day it was laid. Store eggs below 5ºC to limit bacterial growth.

The best way to clean backyard eggs is to wipe them with a clean brush or damp cloth. Egg shells are porous so washing may cause bacteria to enter into the egg. Store backyard eggs separately in the fridge to avoid contact with other food and wash your hands after handling.

Pasteurised eggs have been treated to ensure they do not contain bacteria. They are much safer for making condiments like mayonnaise and are often used when cooking for the elderly, immune compromised or young.

Do not wash raw chicken before preparing and cooking. Washing raw chicken will contaminate the sink area and provide additional areas for bacterial growth in the kitchen. Use paper towels to pat the chicken to remove excess moisture prior to cooking.

Foods like meats and seafood must be thawed in the refrigerator a day or two prior to use. Food left on the bench does not thaw evenly and the outer layers may exceed 5oC, allowing bacteria to grow. Thawing food in the fridge ensures it remains under 5oC and reduces the risk of foodborne illnesses. 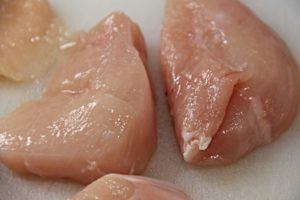 Best Before & Used By Dates

Cooked foods should be allowed to cool down to 60ºC prior to being place in the fridge. Storing hot foods in the fridge may increase the temperature of other food in the fridge. Food businesses must cool food from 60oC to 21oC within 2hr, and from 21oC to 5oC within a further four hours. In commercial kitchens this is known as the “2 and 4” hour rule.

Raw food like meat and fish should be stored on the lowest shelf to reduce the risk of contamination. 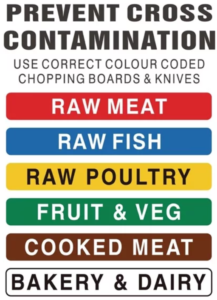 Cutting boards should be colour coded to avoid cross contamination.

Thoroughly clean and sanitise cutting boards immediately after use to minimise the risk of foodborne illness and cross contamination in the kitchen. Colour-coded knives are also advised.

Commercial dishwashers are more expensive than domestic dishwashers but complete washing cycles much quicker (usually within 5mins) and generate hotter temperatures (in excess of 80ºC).

Try to avoid eating salads, rice, gravy and sauces when travelling and avoid placing ice in your drinks. Generally anything that is deep fried or well-cooked in an oven will be a safer option as the cooking process will kill bacteria that could give you a foodborne illness.